Song of the Week: “Dear Travis”

Well, Soundcloud has gone and changed everything, so hopefully I’ve done this right. ‘Cause this week’s Horizon song is a fancy quartet, with some pretty fancy people on it!

Now that Travis has joined the Marines and is halfway around the world, the folks back home write to him in their customary, almost-saying-what-they-mean fashion. The folks in question are: now-estranged younger brother Robbie (Brad Greer); Robbie’s new wife and Travis’ ex (oops!) Amy (Patti Murin); and Mom and Dad (Becca Ayers & John Antony).

As always, you will have to Google photos of these fine-lookin’ people, as I can only be trusted to take pictures of random animals I find around Manhattan. 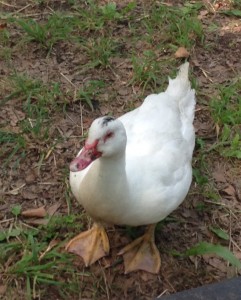 Song of the Week: “One More Time”

From Horizon
Performed by Becca Ayers

Time for your weekly dose of Horizon music, my little future ticket buyers! Today’s guest artiste is the wonderful Becca Ayers, who worked on my Hurricane show a few years ago, and who then went on to do South Pacific on the Broad Way, and she was also terrific in Dogfight at 2econdStage last year. And that’s how you spell 2econdStage.

Here’s a solo tune for the boys’ mom as she reflects on her own youth, hoping her damn kids aren’t about to screw things up entirely now that it’s their turn. And as always, I forgot to take any pictures of Bex being great on this, so here’s one of a baby rabbit I saw on the bike path uptown.

Posted in Music, Musicals, News, Song of the Week | Tagged becca ayers, chip klose, horizon, michael holland, musical theatre, pictures of baby rabbits that have nothing to do with anything | Leave a comment

Song of the Week: “Broken”

Sometimes in musicals, people get MAD! (And it’s usually me. In the audience.)

This time it’s Travis, whose little brother has not only stolen his girlfriend (well, ex-girlfriend), but has also gotten her pregnant and is about to throw his promising future away in a misguided effort to step up to the plate. This is Travis licking his wounds after they’ve had it out in a drunken brawl. (Did I mention this is an adaptation/modernization of an O’Neill play?)

Once again, hats off to Eric Michael Krop for nailing this vocal! If they gave awards for demos nobody’s likely to hear, he would get nominated, definitely. Which, frankly, should be enough.

This pic was too big, but then I kropped it.

Song of the Week: “You Never Know”

From Horizon
Performed by Patti Murin and Brad Greer

In today’s episode, it’s the eve of 18-year-old Robbie’s departure for college – and girlfriend Amy’s last chance to tell him something really important, you guys!!! Meanwhile, all Robbie can manage to do is congratulate himself for finally getting out of Dodge – it’s kind of a theme with him, and we really need to have a talk about it. Trouble is, Amy’s pregnant (there will be some clarifying dialogue at some point, but if you pay attention to how she explains that families “grow…and grow,” you’ll get it before Robbie does). Complicating things further is the fact that their relationship has been a secret up till now, because Amy is also older brother Travis’ ex-girlfriend. Usually. OMG, it’s just like life!

Except for the parts where they sing – and do they ever! Once again, the sensational Brad Greer played Robbie; check him out in the upcoming Orion Experience. And Amy was sung by the phenomenal – and certifiable – Patti Murin, who currently is in Love’s Labour’s Lost at Shakespeare in the Park, and who made me laugh so hard during the session that I had a headache for an hour afterward. The fun kind!

Song of the Week: “Horizon”

I think I promised you guys some new music this summer, so here comes some! I’ve been writing this show with my friend Chip Klose, and we were in the studio last week with some incredible performers, having a blast and making a ruckus. The show is called Horizon, and it’s based on something, though I don’t know if I’m allowed to tell you what yet and it’s too early to call Chip. But this is the title song, and here’s the setup: Robbie (Brad Greer) is about to ditch his small town and go off to college and see the world, to the bemusement and good-natured derision of older brother Travis (Eric Michael Krop). I think that’s all you need to know so far, but rest assured something is about to change everything and then all kinds of stuff happens!!!!!

I am becoming notorious for forgetting to photo-document these soon-to-be-legendary recording sessions – usually because I’m too busy cutting up with the engineer or staring incredulously at my own charts. So here’s a pic of Eric pretending to sing after we were already done with everything: 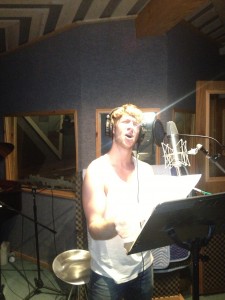 Of course, I neglected to get a shot of Brad, who is also handsome, so just use your imagination. Or enjoy another faked candid shot of EMK: 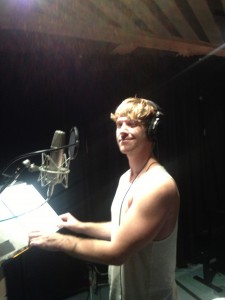 Serving you sass since like the 90′s, or something ridiculous.

Song of the Week: “Sergio”

Just back from the first dog walk of summer (“Hey, a sidewalk full of unripened mulberries goes right through ya!” says Pearl). Thinking of this, my favorite season, I always return to the music I remember from my first summers on the planet. I suppose I could have grown up normally, my nascent ear nurtured by the likes of The Beach Boys and Motown (which I loved then and still do), but for some reason I always felt more drawn to the stable of lovable nerds on A&M – the Burt Bacharach, the Herb Alpert, the Sergio Mendes & Brasil 66!!! Maybe it was the fact that when you heard one of their tunes for the first time, you couldn’t necessarily predict what the next three minutes of your life were going to be like; I didn’t like my pop culture spoon-fed to me even then. Maybe it was the undercurrent of melancholy that runs through so much of what these guys put out, even in the “happy” songs – come to think of it, that’s definitely it – I mean, have we met?! This tune, from my first CD a hundred years ago (which I think means I now own the masters???), hearkens back to a time before entertainment became completely focus-grouped and homogenized – intended as a tribute to a now nonexistent industry faction that once rewarded originality and innovation, not to mention off-beat weirdness. Welcome to summer, old-school A&M-style: enjoy it while it lasts. (Even though this is officially my Favorite Day of the Year, I can’t stop myself from noticing that tomorrow they start getting shorter!)

June is LGBT Pride Month. All over the meadow and the hill.

There’s pride in that there shirt.

It’s also the month my friend JD Doyle has chosen to spotlight yours truly on his internet radio programme (which is LGBT talk for “show”) OutRadio! JD is a chronicler/historian/archivist/enthusiast/champion of queer music, and an all-around great guy, so give him a listen. You’ll discover some great artists, and you don’t even have to be a degenerate to like ‘em! 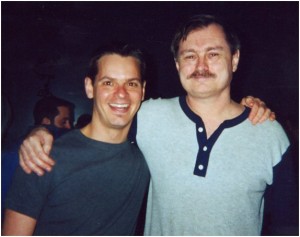 This is a fun feature for me, particularly as I haven’t done a solo recording in a decade now. Mind you, I have enough material in the vaults for another ten or so, but I can’t afford to make more unless you pay for it. And then agree to store them in your house after they’re done.

But for all you non-moguls out there, just tune in, enjoy the music, and have a fabulous June…whether you’re bugs’n out of bushes or huckin’ the bejeepers.

Song of the Week: “Beatrice’s Boyfriend”

I realize I should rename this feature Song of the Whenever I Feel Like It, but I’ve been too busy scrambling for money and threatening to leave the business (again) to be concerned with things like consistency. Anyway, after a fairly Holly Jolly Memorial Day we’re finally getting some seasonal weather in NYC, so I thought I’d share this oldie. Hard to believe I was recording this CD ten years ago, and harder still to imagine that it was already a song from the vaults then; I actually wrote it in 1985!!! In crayon. So break out the sunscreen, and enjoy this twisted little tale of insecurity and probably murder. Happy summer!

Behold: an 8-minute mini-musical for your enjoyment. This epic stopped the show at Joe’s Pub a couple of weeks ago, which is a good thing, because it also ended it. Oh, and there was a choir.

Song of the Week: “Hardly Anybody Talks English”

Last week I visited the 9/11 Memorial downtown with a friend from Boston. I have to say it is a humbling, moving experience, and everyone should go. But a word of warning: there are American tourists there – leaning on the railings inscribed with “Please Do Not Lean on the Railings,” making hilarious faces and cutting up while posing for pictures, etc. This one’s for them.