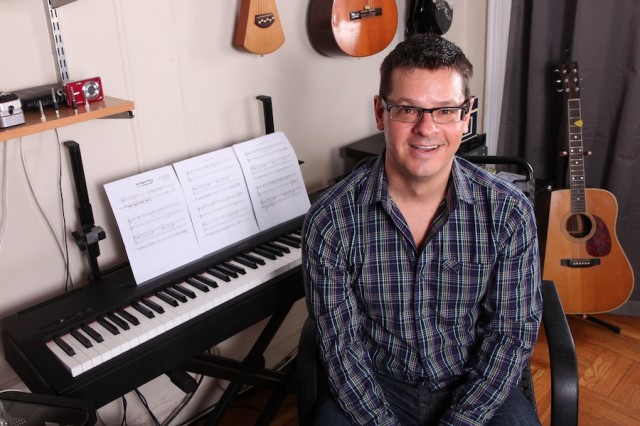 I was born at Backus Hospital in Norwich Connecticut. But I lived, so I fled to New York 26 years later. Not a lot happened in the interim (nor in the afterim for a number of years, it should be said), but just as in most pediatric waiting rooms, there are highlights.

After attending Eastern Connecticut State University for a couple of years, I transferred to Boston University, as I required a city-with-training-wheels to practice on before the aforementioned fleeing could commence. Arriving in NYC in 1990, I promptly placed second in the Marlboro Music Talent Round-Up. I probably wouldn’t have entered had I known it was a competition for bands, but there I was, all by myself with my little guitar, cracking wise and singing my songs onstage at The Bottom Line. It was a lovely validation, and the $3000 prize money was a kick in those days (I would have framed the checks, but needed the money for booze). As it turned out, stardom did not immediately follow this triumph, but a breathtaking assortment of day jobs over the years will attest to my lack of any other skills, so I stuck with it. A regular performer in what was left of the acoustic singer/songwriter scene in the Village, I co-founded the Urban Acoustic Collective (well, Gene & Mimi did most of the founding, but I was there). It was during this time that my first CD, Everybody’s a Jerk, was released to a distracted-at-best world, and subsequently my song “Drunk Girl” became something of an anthem at Wheaton College and nowhere else. (I can tell you that Wheaton College is located… someplace – and I’ve played there. Twice.)

By 1995, New York had failed to deliver on everything I’d thought I’d heard it promise me, so in retaliation, I left (more fleeing). Somehow, the city endured this grueling punishment for almost four years, and I seriously hope it learned its lesson. I washed up in Provincetown Massachusetts (which some people refer to as “P-town,” but most of us end up calling it “No-Not-Providence-Rhode-Island-Provincetown-Massachusetts” at one time or another). It was here that I wound up arranging/writing/music directing/performing in a trio called Comfortable Shoes. I also recorded my second CD (Thank You for the Afghan), and one with the Shoes (Happy Joy), and began playing piano for chanteuse Musty Chiffon – an association which continues to this day, whenever I can get her to leave her house to do a damn gig.

1999 saw my widely unnoticed return to New York, where I recorded my third CD, Darkness Falls, which actually made a little noise (unprintable here). I also met Karen Mack, God help us all. We began to gig together, as I continued to explore the glory of the mashup, begun with the Shoes. This led to the formation of Gashole! and its various permutations. Let’s see… Gashole! was…uh…let’s call it a show, celebrating the best while preferring the worst of pop music. We liked to think of it as The Fair-to-Middlin’ American Songbook. What was intended as a one-off side project – on the side of what exactly we cannot recall – ended up running an inexplicable twelve years, and it may not be over yet! We’ve played London, Dublin, Minneapolis – you name it. People in the hinterlands tend to think we’re married, but we are not. (Actually, she is [usually], but I’m not.)

Oh my God, are we up to 2013 yet? Ugh…okay. In 2003, I recorded what would turn out to be my final studio album (unless it wasn’t), entitled Beach Toys Won’t Save You. Then, my theatre hotline started ringing, and I hadn’t even known I had one till it did. I’d always imagined I’d eventually write for the stage, though I’d planned on the transition being made poolside, surrounded by Grammys and with tearfully apologetic childhood acquaintances peering through the gate. But the call came in Astoria, and I answered, for some reason – writing the lyrics and music for Believe in Me… a Bigfoot musical in seven months, in time for the New York Fringe Festival. Some great press followed, and I found myself actually doing this. I began my next score, Hurricane, and shortly thereafter made the acquaintance of one Scott Schwartz, theatre director of immense coolness and ridiculousness. I discovered that I love composing incidental music for plays, and have worked with Scott at some fabulous places on some amazing projects. Suddenly, it was 2013 and I could stop typing now!! Grrrr…okay, a little more.

It took a while, but I finally started to feel like an actual part of what was going on in this city. Gashole! has picked up more awards than I can display in my roach-infested deathtrap of an apartment, so y’know, it’s been equal parts glamour and demoralization, but that’s okay. Hurricane ended up being born at the New York Musical Theatre Festival in 2009, and is supposedly being developed for world domination by actual producers, but I don’t know what the Christ is going on, so don’t ask me. In 2011 I had the immense honor of providing orchestrations and vocal arrangements for the Broadway revival of Godspell. Working with Stephen Schwartz was thrilling, challenging, and just fun – and it blows my mind every time I see our names next to each other on the CD’s producer credit. And yes, I see it all the time; I can’t stop looking at it. 2012 saw me feverishly completing a commissioned musical theatre score in crazy record time, which was unceremoniously rejected even faster! So in November I started writing a 12-song revue/concert/concept album hybrid called “You’re Gonna Hate This” for myself and Broadway genius Lindsay Mendez; I finished it a couple of weeks before we debuted it at Joe’s Pub in April. I’m working on birthing a couple of other shows now (well, three), and waiting to hear about an actual paying gig or two, which I refuse to jinx in Bio form.

‘Cause listen, I’m not bragging; a month from now I could very well be making your latte. But there’s usually some terrifying new adventure around the next corner, and if it doesn’t involve someone assaulting me for my iPhone, I’m in. More news as it happens…

And the short version…