Summer arrives this week, and with it, our first 90-plus degree days of 2012. This promises to be a boon to New York’s number one industry: meteorologically-inspired complaining. Of course, the Women of Inwood® have been fanning themselves and gasping since the first April day that we hit 70 (“Ay, mami, so hot“), unaccustomed as they are to the oppressive conditions here – which makes perfect sense when you consider that they hail from the frigid Dominican Republic. This always happens the day after everyone is finished carping about how cold they are, for as everyone knows, it’s never “just right” in New York City. I, however, will not be among the climatically disenchanted when the heat wave comes: I live for this time of year. Even when the humidity kicks in and things tend toward the fragrantly sticky, all I have to do is picture one of those magical urban winter days – the gray skies, the bitter, slicing winds, the black-encrusted snow lining impassibly slushy streets – to appreciate the relative freedom of movement that summer brings. Besides, ConEd is already charging me as if my AC has been running around the clock, so I may as well start needing it (typical NYC logic).

One of my favorite things to do on a sultry day is to hop on my bike and just see where it takes me. The Greenway, a paved trail that snakes down the length of Manhattan along the Hudson River, is pretty much devoid of traffic on hot days, the pudgy office girls of May having put their Christmas bikes back into storage by now – two consecutive weekends of suddenly stopping in the middle of the path to point at things being enough physical exertion for one season, thank you. Or maybe I’ll take a quick jaunt over the GWB (I don’t mind when people abbreviate this in writing, but I hate when they say it; you’re not saving time or syllables by not saying “George Washington Bridge”), and then it’s up 9W for some great scenery and quaint riverside hamlets like Nyack (it’s a trek for these old bones, but worth it). Or, on this side of the river, there’s the actual Sleepy Hollow (allegedly), just a bit north of here – though to get there, you have to pass through Yonkers, and here are the two things wrong with that. First of all, somehow the city fathers found a way to design a town that’s an uphill slog both ways (I mean, hats off, but what the hell); the other caveat being that one wrong turn lands you in an episode of Hill Street Blues – one where a lead character gets shot.

But when it comes to harrowing, nothing beats taking a spin through my neighborhood. My street happens to cross into the Bronx, becoming Fordham Road; shortly after passing the university, you can pick up the bike path that leads to City Island (an old, miniature fishing enclave that would be called New England Land at Disney), Orchard Beach, or points east – but you have to make it alive to the redundantly-named Bronx Zoo first. Beside the fact that everyone here drives like they just heard of cars yesterday – though it must be said they can text like the wind while driving them – you can bet that the Starsky & Hutch Limousine Service fleet will be out in full careen, seeking out fares by any means necessary. 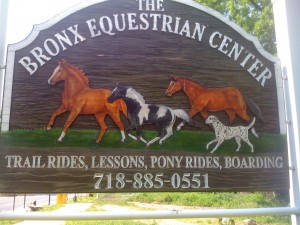 "Home of the Giant Dalmatian"

Once through the gauntlet, however, my favorite bike path meanders past the riding stables, alongside the golf course, and through a wooded area, till it dumps you out in – Narnia, I thought, the first time I encountered the stately homes of Pelham. After that, it’s just a short ride to Route 1, and such charming, bike-friendly towns as Larchmont, Mamaroneck, and Rye. On a particularly ambitious day I might wander as far as Greenwich or Cos Cob (yes, I ride my bike to Connecticut). I’ll never set any speed records but I’m scrappy, so I just keep going. 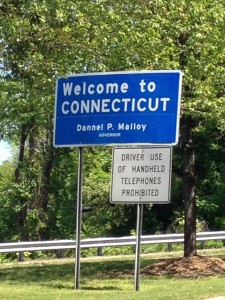 On a particularly warm day last year, while tooling around in Rye, I noticed that I’d underestimated my water reserves. Remembering that there was a drinking fountain at the ranger station in the Rye Marshlands Conservancy, I turned in for a refill. There I was greeted by Ranger Scott, who asked if I was there to hike some trails. I explained that I was on the move, but that I would do so some other time. “There’s a rack right there; you can lock it up and just go for as long as you want,” he offered. “Oh, I don’t have a lock on me today,” I said, preparing to shove off. “Well, you can just stash it in my office then.” Clearly, Ranger Scott was determined that I check out these trails, so I gave in and set off on foot for parts unknown.

It’s a fairly spectacular area – well-maintained forest trails, an overgrown meadow, and the salt marsh itself, which is a prime location for birdwatching (and face-to-face deer meeting, as it turns out). On a wooded cliff with stunning views of the Sound, I discovered what looked like the remains of a brick fireplace. When I asked about it back at the station, Ranger Scott said, “Oh, you found the chimney.” Pointing out my coordinates on a crude diorama, he told me, “This land was owned for generations by a family named Hayes. They had a home out on the point there, till 1938.” “The hurricane?” I volunteered eagerly, explaining that I’d written an entire show about the very storm that had indeed taken out the Hayes house. Interesting Nature Fact: forest rangers enjoy discussing musical theatre more than you might imagine. At least this one did. (Or was he just being kind?)

I pedaled back to Manhattan with yet another unexpected adventure under my belt (not literally, you pigs), and all because I’d chosen to actually do something on a hot summer day. Sure, a bit more sweating tends to happen (though we have showers for that now), but I can’t have that kind of fun when NYC is socked in under a foot of grimy snow. Besides, it beats sitting around the apartment, waiting for the phone to ring. And running the air conditioner.

One Response to I Want to Ride It Where I Like