My sister is visiting from Austin this Saturday, and she’s bringing my two nieces. We are to enjoy a Day in the City, which will include the Taking in of a Show, followed by a night spent uptown in Uncle Michael’s slum.

The show in question is Annie, I’m not thrilled to report. I tried to persuade my sister to opt for Cinderella instead, but was forced to admit that the humor of Douglas Carter Beane’s book might be somewhat lost on the kids. I saw a reading of it last year, and found it hilarious, so I was a little surprised at its recent mixed reviews. Then again, it was a decidedly Rodgers & Hammerstein-type crowd that afternoon (judging by the ambulances parked outside), presided over by R&H Organization officers like puffed-up parents. “I wrote a book one time and I know people!” said one. (Okay, so maybe I don’t remember exactly what he said, but you find me one person who does.) At least Laura Osnes has been getting lots of love from the critics – she is nice, so I’m glad. I know people!!

*Sigh*: Annie. Every time I forget it’s encamped at the Palace Theatre and happen to blunder past, I literally have to run from the air-raid siren they’ve got blasting “Tomorrow” on an endless loop. But this is the kids’ big trip to the Big Apple, and this is the show they’ve selected to sleep through. And then it’s off to the hovel – which I do hope to have excavated in time.

As most of you know, I’ve been busy these past few months writing a new show, and while I do enjoy all the newfangled technology available to artists and hacks alike these days, I was brought up gleefully wasting paper and continue to do so. All of my ideas are written in longhand first (I’m actually penning this entry in a looseleaf notebook at the coffee shop [well, now I’m typing it {well actually, I’m done now and you’re reading it – windmills of your mind, motherfucker!!}]), and as a result there are mountains of paper all over the apartment. Wading through/disposing of it all is the easy part though; it’s the actual cleaning of this dump where the real soul-sucking happens. 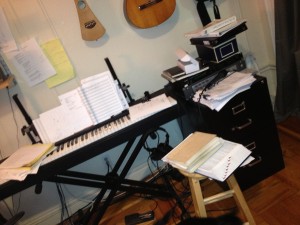 My refuge from organization. Inspiring, I know.

It’s no secret that my career choices have necessitated certain sacrifices, and that I have been forced to settle for seventh best in most respects. For example, yesterday as I was finishing an hour’s worth of tub scrubbing, three large tiles suddenly burst from the wall and shattered in said bathtub in a cascade of fine black dust, comprised of whatever mold and roach crap gets packed behind there. (Nature’s perpetual renewal is a wonder to behold, isn’t it?) Also, I have no cable – because it’s terrible, and I can’t afford it anyway – so Uncle Michael’s house is not only a potential deathtrap, it is also boring.

I’m excited to see the girls, and glad they’re coming, and I’m sure that by Sunday everyone will be glad they don’t live here…yet. (One of them keeps insisting on appearing in musicals back home – like alcoholism and career criminality, it does run in families.) And I’ll take “boring,” so long as nobody gets killed on that trick fifth floor stair or trying to run a hair dryer. Follow your dreams, girls!

This entry was posted in Blog, News and tagged blog, michael holland, NYC, theatre, tourists who happen to be relatives. Bookmark the permalink.