Back in 1997, on one of the few days I can actually remember from my time living in Provincetown (*hic!*), I was recording some demos for a musical I’d been writing. The studio was in the home of one Dini Lamot, known all over town for (among other things) drag alter-ego Musty Chiffon, and belting out 60s acid rock anthems in a fearless bari-tenor having nothing whatsoever to do with showtunes, or female impersonation, for that matter. I was a fan – had been for years, actually, ever since Dini (along with his partner Windle Davis, brother Larry Bangor, and an assortment of various other misfits) had been in the very nearly world-famous Boston band “Human Sexual Response.” (Their song “[I Wanna Be] Jackie Onassis” might ring a bell, if you’re a hundred.)

As I worked, Dini paraded through the house in preparation for that evening’s performance, while Musty’s considerable attributes gradually came together (it’s quite an operation). Breezing past the studio door as I laid down a keyboard part, he exclaimed, “Oh, my goddess! You play piano!”

“I only knew you played guitar with the Shoes, but I didn’t know about the piano. I need a piano player for a month in San Francisco; wanna do it?”

And just like that, a 15-year (and counting) association was born. In truth, I had been playing guitar pretty much exclusively for some time, having sold my keyboards off during the 80s (see *hic!*, above), so I wasn’t really sure I could handle the gig. And on our third night in San Francisco, I actually played the entire show in a cold sweat, convinced that I would never get through the next chord or transition – for the entire show. But as soon as we got backstage, Musty enthused, “Oh, my goddess, you’re the best piano player I’ve ever had. You can never leave me.” While I still have doubts about the first half of that proclamation, the second has certainly proven to be true. We’ve played San Francisco a few times, as well as Key West, Santa Fe, Palm Springs and, perhaps our crowning achievement, Albany (where I played the whole show with a broken arm that I thought I’d only sprained – and I’d stopped boozing it up by then!). The gigs don’t come as fast and furious anymore as they once did, but I still love whenever one happens. Here’s a pic from one we did last summer. 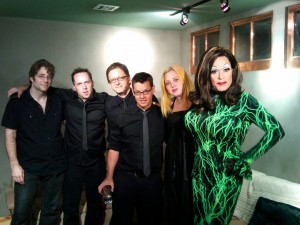 A couple of weeks ago, I received the following voicemail message from Dini: “I had a dream about you last night. You were all dressed up in black tie and I said hi to you but you ignored me. EVEN IN MY DREAMS!!!” Click. This was followed by a few phone calls about an upcoming appearance, and a commission for a new track. (Because we’re not always able to be in the same place at the same time, or if a booking isn’t for a full-length show [or any number of other reasons, really], I’ve made lavishly orchestrated backing tracks of much of our repertoire.) I set to work after getting the usual 65 completely contradictory directions, and fired off the finished product on Sunday night. What came next was a barrage of phone calls and emails, thanking me for the work, and just showing appreciation for all the stuff we’ve gotten to do together over the years.

I take the time to tell you about this because more often than not, mine is a most thankless business, and it’s got its share of scum-sucking bottom-feeders. (Though what Musty does on her own time is her business.) Back when I was listening to “Jackie O” on the radio and trying to figure out how to bust out of Southeastern Connecticut and become instantaneously famous, I’d never have guessed that years later I’d be rehearsing in Dini and Windle’s living room whining, “No, no, no; it’s all wrong!” Or that we’d go on some of the terrifying adventures we’ve had, onstage and off. Or that I could laugh so hard – and often – as I do with them.

Back when I accepted that first gig, a friend of mine warned, “Be careful. She’ll turn on ya.” Well, she never did (though interestingly enough, guess who did, a couple of years later). It’s way beyond nice to feel appreciated – especially now that I know how rare it is – and it blows my mind that I’m lucky enough to have friends as talented, creative, generous, and yes, as batshit as they are. 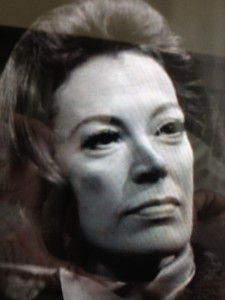 2 Responses to Cherchez Chiffon: Musty Go On Like That?