Nature and Crap: The importance of distractions

Deadline met: Last week I finished my twenty second song in fifteen weeks, thus completing Draft #1 of the commissioned score I’ve been slaving over (and having sent it to the producer last Friday I have not heard one word from him, those of you in the business will be not at all surprised to read). So to celebrate, Kevin and I decided to head north to Beacon NY, for a little R’n'R. I realize I haven’t mentioned Kevin on here yet, but he’s not one of the cats and I haven’t named my ficus, so I have faith you can figure it out. Anyway, said R’n'R consisted of kayaking on the Mighty Hudson and hiking up an entire mountain, so I arrived back home more tired than when I’d left, but it’s an honest, oddly refreshing kind of tired. Once I’d gotten over my fear of tipping over and cracking my face open on the river, I discovered that it’s a lot cleaner than I’d expected: you can actually see a few inches into the choking weeds that lurk menacingly just under you. I wouldn’t willingly ingest any of the water just yet, but an encouraging amount of wildlife has returned and is flourishing, so we saw a whole bunch of cool stuff, which is the scientific term for Great Blue Herons, mallards, cormorants, and something huge jumping out of the water every so often, which I hope was a fish. 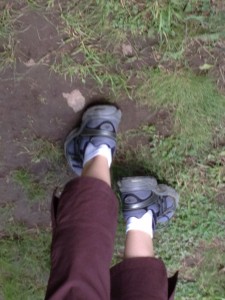 Digression time: I’m writing this at a local diner, and The Loudest Girl on the Planet Earth has just arrived. Evidently an actress, and bent on impressing the guy she’s with (meh), she’s in full-on phony mode, doing that chipper, cutesy-poo routine. I can’t hear myself think, but she can’t hear me hating her, so I guess we’re even. In the five minutes since they sat down, she has used the word “the” 14 times, while “I” has clocked in at a heroic 37.

Okay, I’m back. We stayed here on our voyage into the wilderness. Kevin went to high school with Lauren the owner (not while we were there), and she is a blast. I forgot to take a picture of her, but my phone did this at some point, so imagine the rest.

The view from atop Mount Beacon is pretty staggering, which is convenient, as that was all I was able to do once we got up there. Kevin had decided to skip the mountaineering, so I went with Lauren, who sprints up this thing a few times a week. I did okay, and only thought I had appendicitis twice the whole way. At one point I caved and admitted I needed a break, to which she replied, “We’re almost there. You can see the top from here.” “Well, I’m gonna sit down here and look at it, then,” I said, and that’s what I did. But soon thereafter, I hauled my carcass up to the summit, and saw this! Pretty cool. 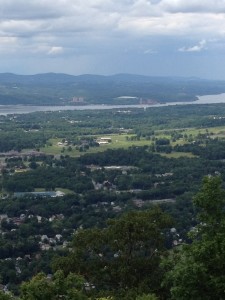 Oh my God, shut up, Loudest Girl! I will never cast you in anything. (Except maybe those Mighty Hudson death weeds.) She’s doing that laugh right now that sounds like she’s reading it off a card.

The Ascent of Mount Beacon was not my first time this week pretending not to be dying on a hill, however. On Sunday, while walking home from the park, I encountered one of the neighborhood Dominican kids, who couldn’t have been more than three, pushing his training-wheel-equipped racing bike up the nearly vertical Payson Avenue sidewalk with some difficulty. “You got it?” I asked as I passed him. “Yeah!” he shouted cheerfully, getting nowhere. I kept going, until I heard a strident “Hey!” from behind me. I turned to see him perched on the bike, patiently waiting for me to catch on. “You want a push?” I guessed, heading back. “Yeah!” came the fearless reply.

That’s right, Loudest Girl. Just eat your breakfast salad. But do it quietly. Yes, we can still see you.

I grabbed the handlebars and began pulling him up the hill. “Where do you wanna go?” “I don’t know!” he exclaimed, thrilled just to be on the move. There was a playground to the left, the old-growth-forest remnants of Inwood Hill Park straight ahead, and traffic everywhere. Unsure of what to do next, I asked where his mom was. “There,” he announced, pointing toward the base of the slope we’d just scaled. There sat Mom, waving from a bench, clearly unfazed by the stranger dragging her child toward the woods. “You wanna go back down?” came out of my mouth before I even had time to realize what was happening. “Yeah!! Fast!” was the order of the day. Now, I run like Goldie Hawn when I’m not lugging a bicycle, so just picture it. As I ran down the sidewalk, pulling this little kid and hoping not to trip or otherwise expire, he began enthusiastically estimating our speed – “Seventeen! Thirty-five! Forty-ten!” – until we reached his mom. “TEN!!” he proclaimed triumphantly. “Thank you,” whispered Mom, obviously grateful for the reprieve. “Bye,” said my new friend, as I headed back up the hill and completely around the next corner before allowing myself to pant. (Not sure what that was all about.)

Of course, that was one of those moments I live for in this city. Unexpected diversions are as important as the planned ones. Without them, all I’d do with every spare second is worry about what will happen if the minute-and-forty-five-second number the cast of Godspell is performing on the Tonys Sunday night doesn’t generate enough ticket sales to keep the show open. Or worry about when the producer of the project I just turned in will suddenly surface to demand a lunch meeting, opening with what a genius I am before launching into all the reasons he’s disappointed by the work he didn’t allow me enough time to do. Or how I’m supposed to put together a reading of my other new show in July. Truth is, I could use a distraction once in a while. I’m glad I’m in the right place (or about an hour away, at least) for them to happen.

Oh. Loudest Girl just left, talking about cable television!!! and ketchup!!!! and skis!!!!! Just in time, too. Now that I’m done, I can concentrate.